REMEMBERING TUKARAM OMBLE - WE NEED TO ASK 'THE QUESTION'. 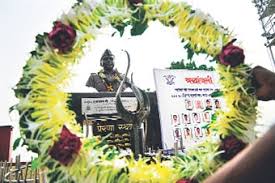 In his random thoughts of a one page short story 'The Question', Rabindranath Tagore dwells on a simple and yet the most thought provoking question a child can ask about his mother.
When the father comes back from the crematorium, his seven-year-old son asks him, "Where is Mother?" The father pointing to the sky says, "In heaven." The father then cries himself to sleep but the world goes on as usual. "The lantern glowed dimly at the door. A pair of lizards walked the walls." The child however remains completely bewildered and longs to ask someone about the way to heaven. But whoever knows the whereabouts of death? "The sky failed to respond; only the tears of the silent night twinkled in the stars."

Today, even after ten long years, assistant sub-inspector Tukaram Omble's family continues to not celebrate any festival. This brave man had succumbed to the bullets of Kasab when he had daringly pounced on the terrorist to overpower him. His daughter even today feels very lonely and misses him every day.

Death of parents due to illness or accidents or terrorism is a crime against their little children. These deaths offer no explanation to the children and many a times they go into denial of facing the truth. It simply becomes indigestible.

If we as a family of humanity wish our world to be a blissful and harmless place, we need to take care of our children. We need to keep the parents because without parents children grow up in an insecure world. Their emotions get blown to pieces when they lose a parent. Their grief gets an overcoat of anxiety and soon anxiety gets buttoned up in depression.

Whenever there is a terrorist attack anywhere on the planet, the world of a child gets shaken. No amount of security then feels safe; no amount of protection gives the feeling of a sanctuary. As Tagore says, "The houses all around, with every light switched off, looked like shadowy sentries in a demon-land, sleeping even as they stood guard."