A MOUNTAIN WORTH CLIMBING 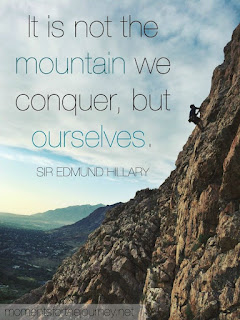 When someone very dear to me went climbing the beautiful rock column forests at Zhangjiajie (popularly known today as the Avatar Mountains after the filming of the movie Avatar over there), I longed to go there too. I knew for sure that the climb and the scenery, both would do me good but I couldn't make it because I was far away struggling with the waves of existence at sea level. The least I could then do was google those floating mountains and admire their beautiful pictures. Standing tall like fingers made in rock, these structures appeared as if they were kissing the clouds. The forest beneath and all around looked so amazing that I promised myself another viewing of the film 'Avatar' which was shot at this scenic spot. The image of the amazingly striking and breathtaking view of the mountain scenery in the movie had gone dim in my memory but those images awakened it to brightness. The beautiful stone forest was like a heaven brought down on earth. 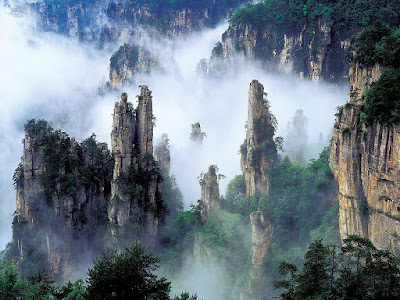 I then sat contentedly and smiled at the joy of my loved one who had gone for a walk on that heavenly ground. The least I could do was help her to live her dreams. But I had dreams too. My dreams were ageing with grey stands of responsibilities. But I knew for sure that dreams had to be fulfilled and so I took up a detour in the climb. I began to scale the mountains within and believe me it wasn’t an easy attempt. The flora and the fauna within, having settled and rested unsearched for a long time looked amazingly captivating. There was the mist of past pains and the fluffy clouds of soft love and the drenching of happiness. At some moments the scared waters of pleasure stopped flowing due to the raging fire of earthly lusts that brought along burning pain in the boat of the body making it unsteady during stormy weather. And then, the wild inside clawed at my heart's greed but the tamed sat undisturbed. There was so much to climb within!
On the mountains outside, the choice had to be made to take the rope way or the lift but on the mountain inside, a conscious decision had to be made to hold on tight to the cord of a glint of happiness or to allow the spirit to be lifted by bright sparks of momentary pleasures. The climb outside was made easier due to the favourable climatic conditions and the climb within was made facile with being grateful.
I realized then, that though the view from the top often brought a jubilant smile on the face of the climber, it was totally different at ground level where not much seemed to be achieved. Being happy today was largely looked upon as an emotion majorly dependent on situations, whereas a great many forgot that it was an obligation which had to be fulfilled towards existence.
"There is no duty we so underrate as the duty of being happy. By being happy, we sow anonymous benefits upon the world." Robert Louis Stevenson.
Then suddenly, my mind went dashing back to the past, when as a little school girl I had the privilege of seeing a dramatic musical performance of the ‘Lost Horizon’, a film based on a novel by James Hilton. Hilton in his book, had created an imaginary place Shangrila, which was a permanently isolated land from the world outside; where those living in there became immortal in their appearance. They were all so beautiful and exotic in themselves that even the thought of a beautiful eternity represented by the Avatar Mountains, brought to my memory an afternoon spent years ago at the Eros theatre.
I then heard a soft voice; maybe a whisper which said that sometimes a Shangrila had to be searched for in one self, 'where the sound of guns didn’t reach' and where peace had been immortalized. Where there would be no getting older in strife but only a collection of wisdom gathering rich experiences; wisdom that made one understand that it wasn’t ever the mountain waiting to be climbed that wore one out, but the grain of sand in the shoe. I had many grains of sand which had to be shaken off to proceed with my journey. As I travelled within to continue the digression I had chosen, another realization dawned upon me and that was the knowledge that the peak reached ultimately only gave a momentary beautiful and breathtaking view, but the real happiness I had managed to achieve was due to the climb and the bruises it had given my skin.
So as she was climbing a mountain out there, I was climbing mine within too. I had an option to grumble at my luck which had transformed me into a rock others needed support of, and which now I had begun to explore, painstakingly cutting its edges and shaping it, or sing my way through a trail never before ventured into, and then smile at my accomplishment. 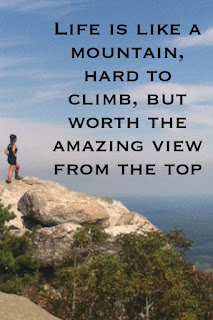