WHEN THE WAR ZONE IS THE HEART 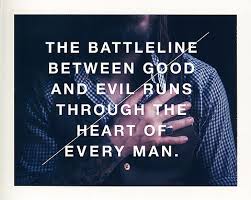 Have you ever thought of a battle that takes place on the battlefield of your heart? Be it the followers of Krishna or the followers of Jesus or of any other prophet, man has always had to fight on this territory representing either the Kingdom of Light or that of Darkness.
In the historical epic, The Mahabharata; Dharmakshetra also means a field of cultivation where we desire to grow the good, but like the unwanted grass which grows in a field of rice alongside the paddy, and needs to be uprooted, the bad which tries to come into the life of goodness will also be uprooted such as the unrighteous sons of Dhritarastra who get uprooted by the good Pandus.
Sadly many a times a brightly lit kingdom begins to fade due to a hardening of the conscience and the refusal to recognize a Right or bring about a change in the Wrong.
Man’s conscience is perhaps the door the Almighty knocks at regularly; but when that knocking is not heeded to and when the door is left unopened, the power of discerning between the Right and the Wrong stops knocking altogether.
Apostle Paul addresses this problem of man so correctly in his words, “For what I am doing, I do not understand; for what I will to do, I do not practice; but what I hate, that I do. If, then, I do what I will not to do, I agree with the law that it is good. But now, it is no longer I who do it, but sin that dwells in me.” Romans 7: 15-17.


The irony of some lives however, is that they are being wounded everyday on this battlefield and yet remain ridiculously unaware about it. I wonder if it would be right to call them the walking dead? 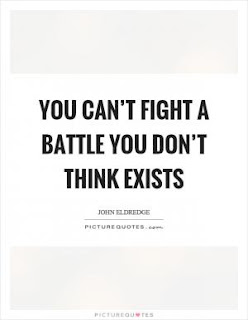