ARE YOU READY TO THROW A STARFISH INTO THE WAVES?


"Ye are of God, little children, and have overcome them: because greater is He that is in you, than He that is in the world.” 1 John 4:4 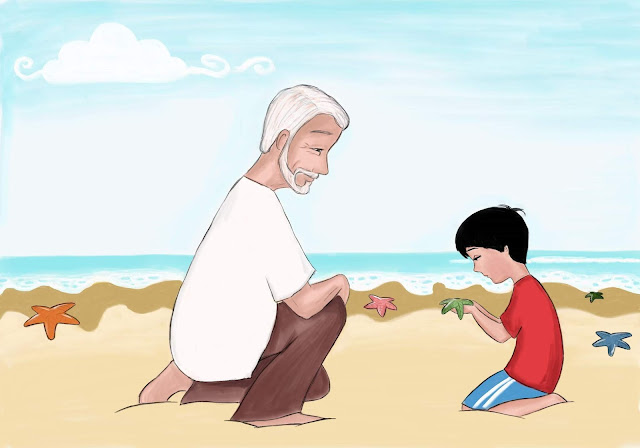 It’s most likely that in life we have sometime or the other been disappointed with someone or something. It could be the behaviour of someone we know or do not know personally, that has disenchanted us. What matters however, is what we do with our feelings. Though we wish for change, we very rarely exercise our powers of reformation.
The moment of anger and dissatisfaction could be at a personal level which may have led to a heartbreaking moment or it could have been at a societal platform. It could be that we had gone through moments where nothing seemed to budge in the direction of change.
At times like that we could be everyday waking up with our eyes sparkling with stars of hope and yet at night having to go to sleep with unsatisfactory pillows of world-weariness. But then, such are the times we need to hold on to our strength of belief in ourselves, because every sunset has the hope of something beautiful coming up the next day. If we are just and composed, we need to have faith that the one in us is far stronger than the one outside.

If at all we let go of this hope in the authority in ourselves, it is because we make assumptions about ourselves; not truly knowing our own capabilities. Such false beliefs then become a load we have to bear along our walks in life and they being heavy, make our journey nothing less than an affliction. Such assumptions therefore need to be scrubbed off to allow the light of our capacities to enter and brighten up the window of understanding, opening it to the fresh breeze of hope in our inner strength. We need not let people or situations or circumstances rule our calm judgement but instead awaken ourselves from the dream of failure and open our eyes to the reality of success;  our birthright.

A classic example of such sense of strength was seen in the present day’s beautiful Royal Bride, Meghan Markle’s feminist activism at the tender age of eleven. This young lady then felt something terribly wrong with an advertisement of a dish soap manufactured by Procter &Gamble and voiced her concern by writing letters to the company expressing her feelings when she heard the words, ‘Women are fighting greasy pots and pans with Ivory Dish Soap’.  The young Markle was so very annoyed regarding the compartmentalizing of women into the kitchen job, that she corresponded to anyone who would listen to her, including Hillary Clinton. She could have thought, ‘whoever is going to listen to my expressions, it’s all so silly and useless’ and let it be just that, resting as a grumbletonian. Then of course, nothing would have changed; but her action in spite of little scope of hope for change did wonders. The commercial was changed and the word ‘women’ was replaced by the word ‘people’.
Markle was alone in that campaign and many of us are today alone in our campaigns; but we can fight for our beliefs and hope to succeed. For what else would life be but a long scrap of experiences falling our way if we had no corrective reactions towards them!
This reminds me of the story, ‘The Starfish’, where  a young boy throwing stranded starfish from the sandy beach back into the ocean, caught the eye of an old traveller, who asked him the reason for such activity. The lad answered that if he were not to help those echinoderms, they would die when the heat of the sun would dry up all the water. The traveller felt the boy was ridiculous because there were millions of starfish on the beach which stretched for thousands of miles. He shrugged his shoulders completely unconvinced by the answer and voiced his pessimistic opinion, ‘It doesn’t matter how many you throw in; you can’t make a difference’. But the boy simply smiled, picked up another starfish and threw it into the water and said, ‘But it makes to this one’.
Change doesn’t always need to begin with a big number. Even a little can make a big difference for someone.
Image Credits: Google