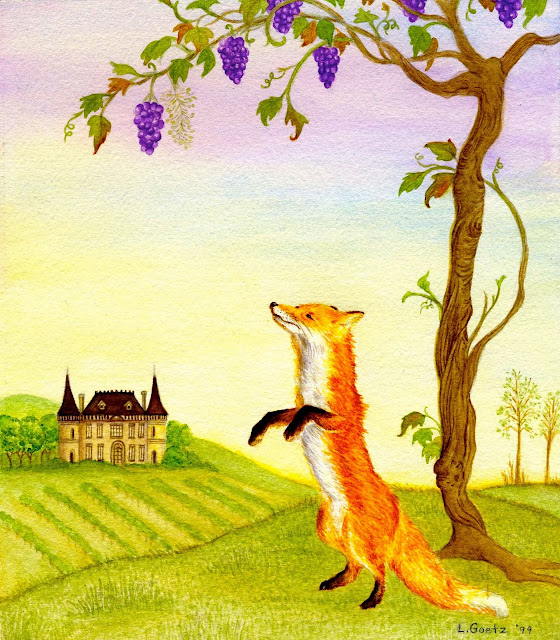 When one afternoon, a fox was walking through the forest, he spotted a bunch of grapes hanging from over a lofty branch. “Of course”, he thought, “this is exactly what my parents, my teachers and my friends would want me to reach up to.” So his endeavours to succeed in getting those grapes began. He jumped high, and then a little higher and then the highest he could, but he couldn’t reach the bunch of grapes. “Bother!” he exclaimed. “They’re probably sour anyway.” Moving on with his journey he continued to search for something else to eat.

When Aesop wrote this little fable, he probably had the youth of the future in mind. He had prophesied a great truth through the fable to which the new world gave a new moral. As this new world told its youth this beautiful story of the essentials of movement in life, it instead focused on stagnation. It claimed that it was always easy to despise what one could not have, and that failure at success often suffered this ‘sour grapes’ syndrome.

True that nothing comes easy in life, true that hard work is essential and true that one must aspire to gain success; but the question is, must one be unhappy if one’s attempts to succeed fail? Must one move with a long face and suffer for eternity for not having reached the goal? Must one get stigmatized for life and be ostracized from the world of successful people to the extent of falling into a deep well of depression?

Misinterpreting the Fox and the Grapes story has led our schools and homes to neglect emotional development. Today we are aware of depression and lay emphasis on it on the World Health Day, but in reality we focus on its suppression and not its expression. Depression today is considered globally one of the leading causes of morbidity amongst the youth. These are the unspoken emotional troubles that regretfully lead to self-abuse and suicide. Obviously then, this invisible disorder needs more attention.

The World Health Organisation estimates that today millions are affected by depression for life. Research states that globally 322 million have depression. This sadly makes up 4.4% of the world population and it is found more in women (5.1%) than in men (3.6%).

Several causes have today been recognized to cause depression. It could be due to an imbalance in brain chemistry which may be triggered suddenly or over time by genetics, it could be because of hormonal changes or chronic illnesses or stress of grief or an inability to face difficult circumstances.

Strangely those who get help in this disorder are only the tip of the iceberg. Today suicide is the leading cause of death among the young. Ironically, it’s an inexpensive and easy to treat illness which is taking lives. We have to work to remove the stigma attached to this illness which prevents people from seeking help and treatment.

A twist in the tale therefore is the need of the hour today. We need to retell the story of The Fox and the Grapes to our children.  This time though we could tell them that it was alright for the fox to be unable to jump high enough to reach the bunch of grapes. The society today needs to learn to accept the foxes who can’t reach the bunch of grapes. Our inability to face failures shows how unripe we are in our vision of success because though we have learnt that ‘Failure is a stepping stone to success’, we have failed to accept failure in a mature manner.

Failure involves emotions of sadness, shame and regret which lead to exhaustion, fatigue and depletion. At a time like this, the one who has failed needs someone to share this sadness with, but the society has done just the opposite. It has encouraged concealment of emotions. The society pressurises its individuals to hide their emotions arising out of failure and such undercover behaviour in turn leads to aggressiveness; the worst towards oneself.

If we wish to create a happy world, we will have to change the understanding of our relationship with the material things we strive for. A question we need to ask ourselves then is, ‘Are the bunch of grapes an end in them self?’ If we can get an answer this, then we will have no need to sulk and grieve if we cannot jump high enough.
Posted by Unknown at 10:25