HAVE YOU MET A JONATHAN KOSHY? 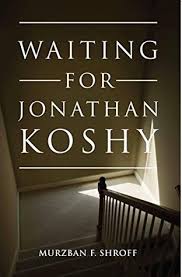 Jonathan's friends remember him as a man who has grown up on his own; ‘Life was his Parent and Pain his teacher’.
The initial chapters move slow, documenting Bandra in her good old days. She is painted in words all over the pages; her people, her roads, her churches with her Christmas and Easter celebrations, her community feelings, her gas and kerosene lit street lights and her film star bungalows, all step out of the book like a film.

Certainly a work of genius, Waiting for Jonathan Koshy digs deep down into the heart of a man; a man for whom all is fair in love and war; a man who has the capacity to transform a tragedy into a comedy, a man who can become a villain hero, and a man who is always a ‘youth on call’.

Shroff’s Jonathan is no ordinary character though. Throughout the story he comes out as someone who is a survivor in spite of oceanic waves all around him, rising tall enough to drown him. He has strange workings indeed. He can make a recovery gangster believe in karma by instilling ideas of professional change in his mind and help him find his ‘true calling’. He is a man of sure risks when he opens the gates of his friend Anwar’s house to the wildness of two hundred locals who have ‘blood in their eyes, fire in their hearts’. Only a Jonathan could think of a history lesson in the midst of a riot. He could touch the ‘right chords’ and convert ‘rioters into protectors and saviours’ and gangsters into helpers. Probably we all have sometime or the other seen a Jonathan in our life and loved him so much to wait for him to arrive again and again.

Jonathan is the neglected child of a world filled with demons. He is a young abandoned man who takes to the world with feelings of ownership ‘without responsibility, without fear’. In his lonely moments he goes to a whore and ends up celebrating her birthday.

In short, ‘Waiting for Jonathan Koshy’ is the story of a man with mixed longings, mixed appetites and mixed emotions and that’s exactly what makes him human. With a childhood that longed for parental care, he observes and appreciates the same in birds. ‘Crows make best parents, did you know? They build the strongest nests and tend to their young till such time as they can look after themselves’, obviously these were the overwhelming thoughts of an untreated and an unhealed wound.

Jonathan’s connections open up to the reader a hidden world of the not so lucky ones. A world where the poor and the helpless are left with no options; but, Jonathan cares for them. He takes Varun, the son of a prostitute, to be counselled by a non-profit organization, convincing him enough to step back from getting castrated and becoming a eunuch for the love of his mother and enter the flesh trade of a different kind. Its Jonathan always, who thrives on ‘doing good all the time’ pushing his readers to think about their own contribution to the world.

There are moments where the book works as an awakening guide for parents, throwing light on parental acts of betrayal which affect children; parental behaviour which lead to deep-seated anger, so deep that the victim feels no need ‘to shake’ it off with therapy.

In all seriousness, Shroff allows humour to sprinkle a shower of smiles on tensed reader brows, such as when people begin to worship Jonathan’s snake image planned to terrify them about Aids. They come with folded hands to worship the icon meant to create a totally different effect; a total boomerang of his plan. Puzzled at the behaviour of the religious minded, he compares his country with a woman and says, ‘I also figured out that India is a woman, a puzzling, enigmatic woman. Try as you might, you can never figure her out. You can love her, yes, or feel frustrated by her, but you can never fully understand her.’

Asking some of the most important questions about life, Jonathan turns philosophical. He claws at our hearts when he fathers to his own old man, who had abandoned his mother for a younger woman; the one who suddenly fell out of the boat of love and humiliated him as he continued to refuse in all his stubbornness to step out of his sinking love vessel.

The story envelopes along with the life of Jonathan, stories of all the women connected to him. Karuna Koshy, Jonathan’s mother, is a woman who returns to a man who in the first place drove her away with his love itch. Without any feelings of hatred or revenge, she returns to help, probably because she has understood that, ‘We are loaned to this world only so that we might repay our debts. This world is not ours, nor has it ever been.’ There are other women characters too who have suffered or have been the cause of suffering, being unable to do justice to their children; women whose breasts had burnt with burning tires which rolled during angry riots, women who were unable to keep promises to their children because the society had no respect for their commitments, women who couldn’t look into the eyes of their sons because of the jobs they did to bring them up, women who had seen their mothers suffer and continued to wage ‘war against all men and against all love’, women who had goodness in their hearts and charity in their hands to help the Jonathans of this world, women who unquestioningly rushed to help those who had destroyed them.

Shroff has ventured to teach us life through Jonathan’s story, which he has interestingly packed with sufferings, longings, doubts, darkness and yet allows moments of realization to pop up ‘when you least expected it’ because after all it has been a long journey for a Jonathan who cares; and it has been long since we have been ‘Waiting for Jonathan Koshy’.
Posted by Unknown at 08:21