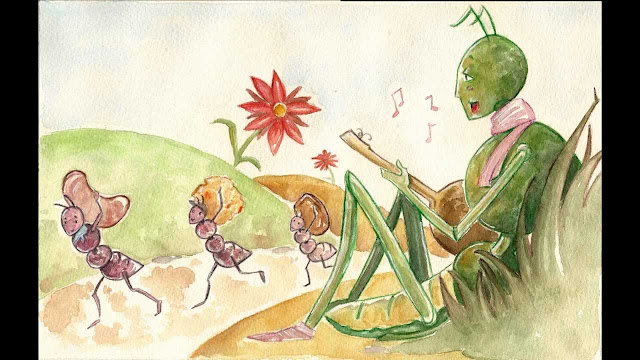 What if the Ant and the Grasshopper, the heroine and the villain of this one of the most read Aesop’s fable exchanged places? If we were to switch their roles, I’m sure they wouldn’t fit in easily. The delight of the Grasshopper to enjoy the beauties of the surroundings; to take in all of the environment as the base of inspiration to sing, rap, dance, write poems and stories wouldn’t be easy for the Ant. And of course the seriousness of the Ant, her laborious life, her hard work would be indigestible for the Grasshopper.

The Ant would normally feel that creativity takes no great talent; that it’s just a waste of valuable time where the whole of man is given away to the senses, where he lies drowsing away days, where the creative person is dangerously lazy and a lot of his time is wasted on vain and empty pleasures. Whereas the Grasshopper would express that hard work was not difficult at all; only drab and dull. That it only concentrated on profit in life, that comforts of industrial wealth was a prior in his life, that it always sought substantial protection, that it felt safe only when it saw a firm future, that it believed that joys and security had to be lasting, that it never went out of season to experience something different and that it always successfully passed avarice upon the world.

The moral taught to us in this story, was that hard work during summer prepared rest for us during winter; and that those who wasted their time singing away in summer, could be told mercilessly to dance away the winter. 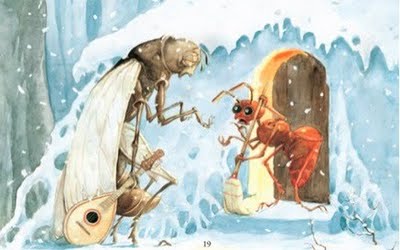 The story in a way promoted a strict code of behaviour of toil where misbehaviour of leisure was unpardonable.

Today however, the need of the hour urges us to be more forgiving and less harsh with those unfortunate ones who probably were not taught the difference between the right and the wrong of the puritanical code of accountability. Of course we need to take care of our necessities, but once they have been fulfilled we also need to take a look at the needs of our neighbours and give them what we may have in spare. Such encouragement of sharing would do common good to humanity at large. What we need to understand today in spite of wearing our crown of self righteousness, is that forgiveness need not have any feeling in its applicability but a decision to act in a particular way. Wouldn’t it be harsh on our part to focus on one man’s fault while ignoring the duty of another? Our conceited response, bereft of mercy to the wrong the other man did would only lead us to be inhumane. The Ant would have risen in her soul climb if she had relieved the Grasshopper in his distress, even when the troubles his way were the evidence of his actions.

And to look at this issue from yet another point of view, if all the Grasshoppers were left to shiver in the winter as a penalty for spending their summers singing and painting, there would be no art left in this world. It is after all the songs the Grasshoppers wrote that the Ants tapped their feet listening to, when they were labouring away in the heat of the sun.

Our society needs Grasshoppers to make the fabric of our community of workers more endurable. For what are the Ants of the world but little birds who make nests on branches that could break under their weight and yet ceaselessly go on working to establish a place for themselves, tweeting away a song they may have heard which reminds them about their wings which could help them fly in moments unendurable.

So let us not stop the Grasshoppers from singing if we want to hear and sing charming tunes of encouragement during arduous moments in our life.
Posted by Unknown at 00:24