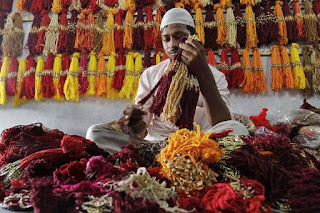 A few days back my country celebrated a festival of strings, which brought to my mind a thought that the need for protection is universal. It’s there in a child and in fact one never outgrows it unless of course one seeks a higher protection leaving behind the need for the one from the flesh.
Raksha Bandhan, is a festival celebrating the bond of love between a brother and a sister; here a sister ties a thread round the wrist of her brother as a symbol of sealing the relationship whereby she seeks to be protected by his strong arms during any physical or mental storm in her life.
Strangely I had a very queer upbringing with regards to this particular celebration. Being an only child, my mother used to make me tie a colourful thread to different pieces of furniture at home. So I had one brother in the refrigerator, one in the study desk, one in my cupboard, one in the sewing machine and so on.  Suddenly, all the standing still pieces at home, sort of came to life with this act. Obviously they had no capacity to protect me and so that role of protection probably got reversed where I became the protector and learnt in a small way to take care of things (even though inanimate) around me.
I can never forget the embarrassment I went through year after year when my mother herself tied a string around my wrist, the significance of which I didn’t understand till recently. It is in fact late in life that I have understood that my mother was perhaps indicating to me the need for being protected in her old age.
As I sit and cogitate today, on the different coloured strings on different wrists, I realise that there are so many wrists waiting for a band of love and protection to be tied around them. There is so much need of shielding by so many in the world. The displaced, the old, the orphaned, the sick and the needy are waiting for someone to tie strings of preservation for them. In this commercialised world, the craze of gifting presents of love for ones near and dear ones and for oneself, there are some who feel misfits and wait longingly for seasons of donations when the rich, to unburden their greedy hearts share some of their unwanted stuff.


Understanding such a need for love, compassion, care and appreciation, I believe,  could become a thread to cross over a bridge of uncaring attitudes in order to provide safety for those who also long to journey their lives in ships of comfort and not in little boats rocked by the waves caused by the storms of living.
Posted by Unknown at 06:51