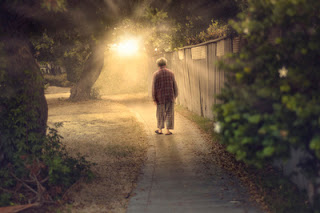 Death spares no one. A gentle man, who happened to live in the building where I reside, fell down unconscious all of a sudden a week back. He was immediately rushed to a hospital but never recovered. His hospital stay was cut short in a matter of less than ten days as his soul bade farewell to his body.
What affected me was not his death since he had already crossed much more than 80 years of holidaying on earth but a phone call from a carpenter whose home town is a village in my country but who stays in my building garage doing odd jobs for survival. He was to be coming at my place for some fittings but chose to cancel the day’s appointment to be present for the departing soul’s last journey. My work was certainly delayed but my mind got an insight into the purity of the poor man’s heart. In the city where people express grief by a simple and short messages and go on with their work, this poor simpleton had paused his day as a mark of a silent respect for the departed, as he was from the area which he now called his home.


I wonder, if he was foolish enough to lose his days earnings as life and death keep happening or was the city’s rush something to be ashamed of.
Posted by Unknown at 08:05