BEING COMPOSED IN PEACE 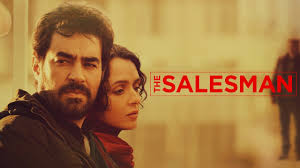 What can man do to accept change within himself and the society in which he lives? This question for me got answered as I watched an  Oscar- winning Iranian Movie, ‘The Salesman’ directed by Asghar Farhadi.
Unfolding the drama, ‘The Death of a Salesman’ by Arthur Miller, within its story, the movie speaks about how an individual can be defined by a single event. The story of a young Iranian couple, Emad (Shahab Hosseini) and Rana (Taraneth Alidoosti) who shift to a new home, is of order in life versus disorder that suddenly drops into the normalcy of living like a bomb. Rana is violently assaulted when she is in the bathroom because a stranger suddenly enters her privacy. It is a case of character drop due to temptation of the man and obvious repulsiveness on the part of the woman.
The details of the what and the how are not revealed to the viewers. Much is left to imagination when Rana is shown with wounds on her head on the hospital bed. Emad wants to lodge a police complaint but Rana refuses in obvious fear of reliving the incident to strange official men. Her expressions however show deep emotional wounds. Apparently, the apartment earlier belonged to a promiscuous lady and therefore the incident. It was a case of mistaken identity and momentous temptation.
Emad then moves on with his own amateur detective search and succeeds only to find a senior citizen as the culprit. The man when caught realises the denial and contradiction of his real self and his portrayed self to his family. He has an old wife and a daughter of marriageable age. An apology follows, but Emad wants revenge. ‘You have to admit what you did to my wife to your family’, is the demand, if an apology is to be granted. The old man gets sick and goes through trauma due to a faint heart. Rana then enters the scenario and tells Emad to let go of the old man. She wants no kind of revenge. In fact she strangely warns Emad that if he reveals the filth of the old man to his family, they will part ways.
On the peripheral level it all seems strange. An obvious question anybody would ask would be, ‘Why let the accused go?’
The Arthur Miller play running alongside shares a similar tale of a fifteen year old affair before the real time of the play. Miller too focuses on the aftermath of an affair. In the end his protagonist commits suicide being unable to deal with the change in himself; a different self from what he would want everybody else to believe. In the movie too the old man gets a stroke after Emad behind closed doors gifts him a tight slap for what he had done to Rana.
Rana’s letting go of the criminal is a letting go of revenge and pain that it would cause to his family women. It’s a humiliated woman after all, who understands what humiliation feels like and does not want two other innocent women to suffer like she has.


The last scene is where the artists, Emad and Rana are shown getting ready for another show of Miller’s play in which they play the dramatic characters of Willy the protagonists and his wife. The make-up artist is shown colouring their faces. Life has to move on, as one has to make up for the loss or the differences one goes through in the process of living. One has to make up in the end to replace the pains one has suffered in the past. The only constant in life being change; it becomes mandatory for man to accept it in peace. And composure of peace can only be achieved when brushes are dipped in colours of forgiveness; because the show must go on. 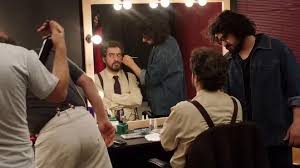