ABOVE THE APPEARANCES OF MEN AND WOMEN 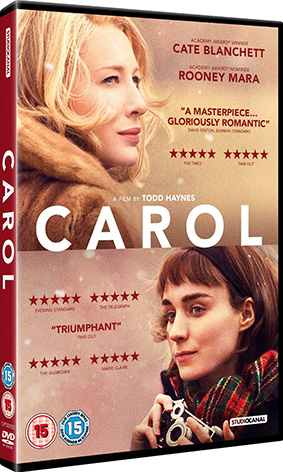 What is it in a movie that makes it a masterpiece? Is it some deep inner longing which when seen on screen gets recognition and makes the film fantastic? Or is it something totally different?
In my opinion, a masterpiece of a movie is the one which breaks new grounds and makes us scratch our heads enough to make us rethink about relationships which are largely left undefined by the society. Another thread in the fabric of a great work is that it’s about life and life is not all about being moral and upright always, though that is what everybody must aspire for. So, if a masterpiece is to reflect life, it need not be all of a moral story. It could in fact be a morally dubious work of creation making the viewer critically observe nuances of reality.
‘Carol’ is in the above terms a Masterpiece indeed, because it urges the viewer to think about something larger than the story unfolding on the screen. It’s like a dive in the hearts of those who are different or who become different due to the influences of time. It’s a story about something remarkable and timeless about the human conditions of facing domination, neglect and loneliness amidst the crowds.
It’s definitely a good story; though many viewers in ways of rigid observation would consider it immoral. However, at the end of all said and done, ‘Carol’ succeeds in capturing the attention of the viewers. There are moments in the film which capture time and transform it into timeless memories which stick on and don’t seem to leave the heart and the mind of the viewer even much later.
‘Carol’ is a story that made me look above the appearances of men and women as different sexes and notice instead, just hearts in different bodies. Hearts which are made to love and desire love in return. We have then ‘Carol’, with love as its theme; a love which every woman is always in search for.
So ‘Carol’, a film set in the 1950’ has its protagonist Carol (Cate Blanchett) going through a separation from her husband who believes he loves her but is unable to understand her emotional needs. It’s a love story of a very strong woman who probably defines love as understanding, care and respect for individual thoughts of the other. It’s a story taking place far away from my country India, and yet not surprisingly I see similarities of what is currently happening around on the land where I stay. Ironically, a section of the women in my country are debating over the injustices of the Triple Talaq (where a Muslim man pronounces the word ‘divorce’ 3 times in a row and gets separation from his wife forever). I wouldn’t be surprised if after watching ‘Carol’, many of these women were to lose faith in their men and prefer to begin love affairs with other women who have suffered similar fates like them, simply because there would be at least an understanding and respect in such a relationship. Of course it would be considered immoral by large numbers, but when a society fails to guide its men on the journey of being human, could the women be considered immoral simply because they seek understanding in love?

In the course of the film, we are vaguely introduced to her friend Abby who is also her child’s Godmother; but in the process of the story we learn that Carol had a relationship with Abby when they were young. Perhaps Carol had seen not a very pleasant figure of a father and therefore had sought companionship with Abby, a friend who would be a more understanding person. But then, confirming to the “normal” ways of the world she did get married to Hugh and gave this man-woman relationship a try. However, not being able to get the much desired respect, understanding and friendship, which have to be components of a marriage, she felt attracted to Therese Belivet (Rooney Mara), a young woman. Therese is the young lady who moves on with her boyfriend in spite of his loving control and dominating role of being in charge of the woman in his life, till she meets Carol. The two women, in spite of their age differences are able to connect in a deep understanding of their absolutely different personalities and bond enough to become lovers.

‘Carol’ is a story with complicated consequences; a love affair forbidden because it’s between a female photographer and an older woman going through a difficult divorce. It’s a film which has made space for itself and for women wanting to get out of the clutches of a Patriarchal society.

Probably it’s when women are too burdened with the know-all men in society, that they driven to fill the role of men in their lives and replace them with understanding women who are not just lovers but loving friends too.

Since the film is not all about the regular and “correct” beliefs of the society, it could be a trouble watch. As we watch the two women protagonists struggling to free themselves from the clutches of male domination, we realise that relationships tend to become cold when partners are taken for granted.  However, when the woman seeks and finds love once again but from another woman, she gets labelled in the court as a ‘morality clause’ – Carol has a daughter whom she loves deeply and is fighting for her custody rights in the court.

Memorable gestures, like a turn of the head, a well manicured hand holding a cigarette, and eyes that speak a complicated love-story between a married woman; a mother of a little girl; so small that she is simply unable to even understand why her parents can’t be together and Therese, a young............ – ‘like something flung out of space’ ....kind of lady, helps hold the film in the mind of the viewers even after they have left the theatre because every heart whether loved or unloved, somewhere deep down understands a longing of this emotion.

When Carol’s husband Hugh forces her to choose between Therese and their child, Carol can be seen shattered. She knows that if she continues with Therese, she will lose her child on morality grounds, but as time passes by, she understands that if she loses Therese and wins the custody of her child, she will probably not be happy enough to make her child feel happy always. Then, in a rare moment of even rarer courage, she decides to not fight a battle for the custody of the child but demands regular visits.

The authority, with which she lets go of her right as a mother, shows that only someone who loves deeply can let go the depth of attachment.

‘Carol’ is indeed a story that resonates within us well past those wonderful moments spent in air-conditioned theaters; because it touches our warm hearts.
Posted by Unknown at 01:23